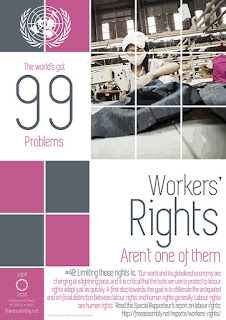 My recent piece in IntLawGrrls, reproduced here, highlights the some of the main points in the recent UN Special Rapporteur report on the rights to freedom of peaceful assembly and association in the workplace.


UN Special Rapporteur Maina Kiai presented his report on the rights to freedom of peaceful assembly and association in the workplace to the UN General Assembly on October 20, 2016.
The Special Rapporteur on the rights to freedom of assembly and association was created in October 2010 by UN Human Rights Council Resolution 15/21 and renewed in September 2013 (UN HRC 24/5) and September 2016 (UN HRC 32/32).  The current Special Rapporteur Maina Kiai has been serving since May 2011.
General Assembly Report A/71/385 examines the rights to assembly and association in the workplace with a special focus on the most marginalized - global supply chain workers, informal workers, migrant workers and domestic workers.
In remarks made on October 21, Maina Kiai recounted how years before, his human rights NGO in Kenya attempted to assist local workers but encountered friction from the local trade union.  It is thus no surprise that the Special Rapporteur calls for obliteration of "the antiquated and artificial distinction between labour rights and human rights generally.  Labour rights are human rights, and the ability to exercise those rights in the workplace is a prerequisite for workers to enjoy a broad range of other rights, whether economic, social, cultural, political or otherwise."
The report outlines the international legal framework establishing the principle that Worker Rights are Human Rights.  The rights to peaceful assembly and association are recognized in Article 20 of the Universal Declaration of Human Rights.  They are recognized as first generation human rights in Articles 21 and 22 of the International Covenant on Civil and Political Rights - with Article 22 specifically including "the right to form and join trade unions" within the right to freedom of assembly.
The International Covenant on Economic, Social and Cultural Rights recognizes the rights to assembly and association as second generation human rights.  Article 8 of ICESCR recognizes the rights for individuals to form and join trade unions and for trade unions to create and join national and international federations.  Article 7 of ICESR recognizes other work-related rights as human rights, including:

The rights to freedom of association and collective bargaining are also enshrined in ILO Conventions 87 and 99.  They are foundational rights essential to the protection of core labor rights in the 1998 ILO Declaration on Fundamental Rights at Work, so States must respect them whether or not they have ratified these 2 conventions.  The Special Rapporteur observes that the Right to Strike has been established in international law for decades and has in fact become customary international law.
States must respect, protect and fulfill the rights to freedom of assembly and association.  States must ensure full enjoyment of these rights for both women and men under Article 4 of the Convention on the Elimination of All Forms of Discrimination against Women.  Many women around the world are excluded from protection under national labor rights regimes because they work in the informal economy.  An estimated 60.7% of the world's workers toil in the informal economy, where employment relationships are not legally regulated.
Others excluded by law from protection in many countries include migrant, domestic and agricultural workers.  Report A/71/385 declares unequivocally that States that discriminate against or exclude certain groups from protective legislation violate their obligations to respect and protect the rights to peaceful assembly and association.
The International Convention on the Protection of the Rights of All Migrant Workers and Members of Their Families recognizes human rights standards protecting migrant workers.  For both authorized and unauthorized migrant workers, exclusion from legal protection and lack of assembly and association rights are compounded by harsh immigration laws and unscrupulous labor recruitment organizations.  The report points to guest worker programs in Bahrain, Kuwait, Oman, Saudi Arabia, Qatar, the United States, the U.K. and Zimbabwe that legally and structurally deny migrant workers' rights to assembly and association.  Workers in these programs who attempt to exercise their rights risk being blacklisted, deported, evicted, denied future visas, threatened with violence and physically assaulted.
Violence - including gender- and racial or ethnic-based violence - is frequently used by States and others to deter the exercise of rights to freedom of peaceful assembly and association.  In 2015, trade unionists were murdered in 11 countries - Chile, Colombia, Egypt, El Salvador, Guatemala, Honduras, Iran, Mexico, Peru, South Africa and Turkey.
The Special Rapporteur issued recommendations not only to States, but to Businesses, the ILO, the United Nations and multilateral financial institutions like the World Bank and IMF as well as to trade unions and civil society.
Key among those recommendations to States are:

Businesses should:
The ILO should:

The UN and MFIs should:

Civil society and trade unions should:

Finally, trade unions should:
Posted by Tequila Brooks at 8:01 AM No comments: