President of Chile Michelle Bachelet speaks at the Wilson Center 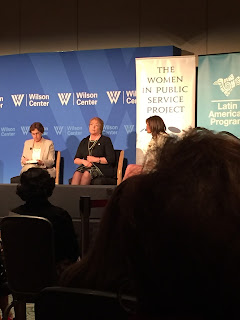 This afternoon President of Chile Michelle Bachelet spoke at the Wilson Center.  A video of the event is available.  She spoke of a wide range of subjects like the absolute necessity for the empowerment of women to ensure sustainable development; her leadership of the 2016 session of the Pacific Alliance and her request to the OECD for a special report on gender equality in Pacific Alliance member states Chile, Colombia, Mexico and Peru (subject of a separate post on this blog); the sometimes harshness of politics; the necessity for quotas and affirmative action to encourage women to participate in politics and private sector leadership; the need to excite children in school rather than have them sit at their desks quietly and passively; and her feelings about the impeachment of Brazilian President Dilma Rousseff and the media's treatment of U.S. Presidential candidate Hillary Clinton.  The event was moved from the Wilson Center's normal conference room to a major lecture hall in the Ronald Reagan International Center.  The audience was engaged and buzzing with excitement.

According to her biography, Michelle Bachelet has served as President of Chile twice.  During the period between her two terms as President, she headed up UN Women, the UN agency dedicated to gender equality and the power of women.  Today, the UN Women released the First report by High-Level Panel on Women's Economic Empowerment, which outlines drivers to advance gender equality.

President Bachelet observed that it is necessary to constantly update strategies to effectively empower women - and that development is unreachable when half of the population is not empowered.  While women's participation in the Latin American workforce has increased from 49.2% in 2000 to 52.9% in 2010, much work still needs to be done - particular in the areas of addressing the wage gap and ensuring a higher percentage of women at top levels of leadership in the government and private sectors.  In addition to her work on an international level ensuring that a gender perspective is incorporated into the Pacific Alliance, President Bachelet's administration has a number of gender-related initiatives to empower women within Chile - like facilitating women's access to capital and credit for businesses and coming up with strategies to increase the number of women scientists and engineers.  She observed that today, there are more female engineers graduating in India than men.

Of particular interest was the Bachelet Administration's participation in foreign affairs in Latin America.  President Bachelet participated in the peace talks leading up to the negotiation of a peace accord between the Government of Colombia and the FARC.  The 297-page peace accord, to be signed on Monday, September 26, is one of the first to specifically include provisions related to gender and pays special attention to the fundamental rights of women, indigenous communities, girls, boys, adolescents, the Afro-Descendent community, those with disabilities and the LGBT community.

Also of interest were Chilean assistance programs in Central America which are being used to support agricultural projects and encourage trade unionism.

It was exciting to be in the presence of the Chilean Head of State - and more exciting to see how she incorporates gender leadership throughout her administration's national and international policies.
Posted by Tequila Brooks at 4:47 PM