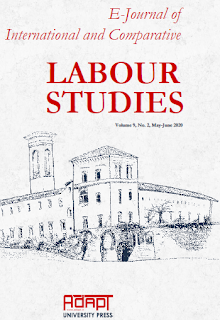 A new article published by Maria Eugenia Rodriguez-Florez in the E-Journal of International and Comparative Labour Studies, "Trade Mechanisms as a Way to Improve Labor Rights Compliance and Its Policies. A Case Study from the United States-Peru Free Trade Agreement," fills several key gaps in existing literature on the intersection between free trade agreements and labor standards.

Rodriguez-Florez's article conducts a comprehensive and insightful analysis of the July 23, 2015 petition filed with the US Department of Labor (DoL) Office of Trade and Labor Affairs (OTLA) under US-Peru Trade Promotion Agreement (TPA) Labor Chapter 17. The 2015 petition, which alleged that the Government of Peru failed to comply with its labor obligations under the US-Peru TPA, is under-theorized in comparison to labor petitions filed under the NAFTA labor side agreement and CAFTA-DR Chapter 16 on Labor.

Utilizing interviews with governmental,  employer, union, and non-governmental actors and observers in Peru and the US, the article:

The 2015 labor petition under the US-Peru TPA contrasts with the 2008 Guatemala labor petition filed under the CAFTA-DR because the Peruvian petition has not been subjected to formal inter-governmental dispute resolution under the free trade agreement. Rodriguez-Florez elucidates not only the cooperative mechanisms utilized by governmental and non-governmental parties to address labor rights issues raised in the petition - but the perspectives of Peruvian government officials on the impact the petition process has had on Peruvian labor policy. The article also includes insights and analysis of Peruvian labor law - as well as the 2013 reform of Peru's labor inspectorate, which was previously a state-by-state mechanism but is now a federal mechanism.
Rodriguez-Florez's article sets the template for a new literature on the impacts of labor provisions in free trade agreements. It is a must read for anyone conducting research and writing in the field - as well as for advocates seeking to utilize FTA labor provisions as tools to improve workers' rights.