The first issue of Volume VII (2021) of The International Labor Rights Case Law journal is dedicated to examining the implementation of the OECD Guidelines for Multi-National Enterprises by National Contact Points (NCPs) in Belgium, France, Germany, the Netherlands, Switzerland, the United States, and Australia. In existence since 2015, the ILRC pairs an excerpt of a key international labor rights decision with a comment by an expert in international labor rights. 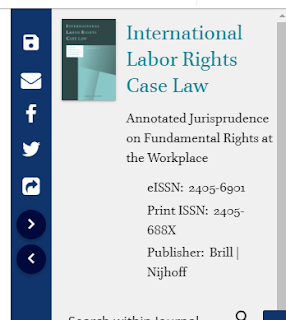 As explained by the journal's Editorial Team in the Introduction to the first issue of Volume VII, OECD member states adhering to the Guidelines must establish an NCP to implement a specific instances mechanism under which trade unions, non-governmental organizations, and other interested parties may submit complaints about the failure of MNEs to comply with the Guidelines. In addition to what the Editorial Team describes as a "relative fragmentation of mediation procedures within each NCP," a review of the six comments on the operation of NCPs of seven countries reveals a reluctance on the part of MNEs to engage in meaningful mediation of disputes related to Freedom of Association and trade union rights.

In her Comment on the report issued by the Belgian NCP on a complaint filed against InBev, the largest global beer producer, about human and labor rights violations at a beer production facility in India, Kari Otteburn questioned whether NCP-sponsored mediation alone is an effective tool to address human rights violations in MNE global value chains. Otteburn observed that unlike other NCPs, the Belgian NCP is not empowered to issue an assessment of underlying facts.

Similarly, in a Comment on the report issued by the Dutch NCP in a case involving violation of trade union and child labor rights by a Dutch sugar company in Bangladesh, Yvonne Erkens found the Dutch NCP's attempt to mediate of trade union rights in the case to be ineffectual because the MNE in question only accepted mediation of disputed instances of child labor, not trade union issues.

Finally, Isabelle Daugareilh wrote a Comment on the first complaint filed with the French NCP regarding COVID-19 safety violations at Teléperformance call centers in 10 countries.

In addition to the series of articles on the application of the OECD Guidelines by various NCPs, the issue contains comments on the Observations of the ILO Committee of Experts on Labor Law in Bangladesh, a decision by the European Court of Human Rights on Forced Labor and Trafficking in Croatia, the lack of legal regulation of forced labor in Poland, and Equal Opportunity for Female Officers in the Indian Military.

Note: If you are unable to read the commentaries in the ILRF, you might consider reaching out to authors to ask them for a limited copy of their article. Or - if you are affiliated with a college or university, consider asking your library to subscribe to this excellent journal.